‘A Connecticut Yankee in King Arthurs Court’ is a novel by Mark Twain and is considered a foundational work in the time travel genre.

William Den Howells, critic and writer, named it as Twain‘s best work and also ‘an object lesson in democracy’

Mark Twain was an American humorist and a writer who found his inspiration from other writers such as Charles Heber and his novel, ‘The Fortunate Island‘(1882) and HG Wells’s ‘The Chronic Argonauts’ (1888).

This story by Mark Twain was first published in England by Chatto &Windus under the title ‘A Yankee at the Court of King Arthur’ in 1889. 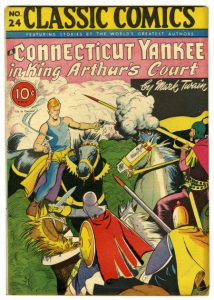 The actual story of an American engineer, Hank Morgan from Connecticut living in the 19 century.

After a strong hit to his head by a crowbar, Hank wakes up in the early medieval England in the 16th century.

He wakes up underneath an oak tree and is soon captured by a knight, Sir Kay. He meets King Arthur and he is ridiculed for his appearance and his clothes. He is sent to burn at the stake on the 21st June. This date coincides with a solar eclipse which happened in the year 528.

Years before Hank had previously read about this eclipse. Taking advantage of his knowledge, Hank sends a boy to tell the King that if he is not set free he will blow the sun. Finally, the King set him free frightened from the eclipse and Hank becomes the principal minister of the King.

With his knowledge from 1300 years in the future, he wants to help the people, to industrialize and develop the civilization.

He makes himself an enemy of the great sorcerer Merlin and they have some conflicts. Of course, Hank fools the people very easily with his advanced knowledge and he becomes the second most powerful man in the kingdom.

Opening secret schools – he wants to share all his knowledge. He also secretly constructs fabrics for the people and chooses the most promising student employment.

Hank later teaches everything to a boy, Clearance who later becomes his assistant.

Later Hank gets married to Sandy and they have a baby. The assistant boy then becomes ill and Hank has to leave the country.

Running away from an army of thirty thousand soldiers that the Catholic Church sends to kill him, Hank finds himself trapped in a cave with his men.

However, his men start to get ill, and many of them die.

One night Clearance sees Merlin whispering a spell upon Hank to make him sleep for 1300 years.

The story ends with Hank, now in the nineteenth century, in his last moments of life and dreaming about Sandy before he passes on.

A Connecticut Yankee in King Arthur’s court’ is actually a very funny story, written with the unique sense of humor of Mark Twain, and it is maybe the first book on time travel. 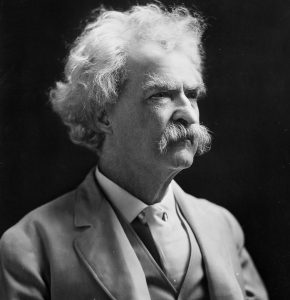 gives you the sensation you are the one who is living the story.

Mark Twain’s, books are read by all age groups, and he can make us feel like little children chasing our dreams.

It was the last book of Mark Twain and we can see a more mature edge to his writing. He showed the dark sides of society while touching some cynical themes.

As the character grows in power, he changes, he becomes more violent and loses control, and the only way finally is a war. He underlines this with the destructive progress of humanity.

But aside from all his other books ‘A Connecticut Yankee in King Arthurs Court’ is remembered for its fantasy and for the imagination and the adventure that can take you away from reality.

Thank you for reading and I am sure you will enjoy the book. If you need any information, just leave me a comment or a message below. Alternatively, you can contact me here!If you are interested in the book click the image below.

Have you read the book? If so what did you think of the story? I would love to hear your thoughts and opinions.

If you prefer to watch the movie I assure you you will love it.