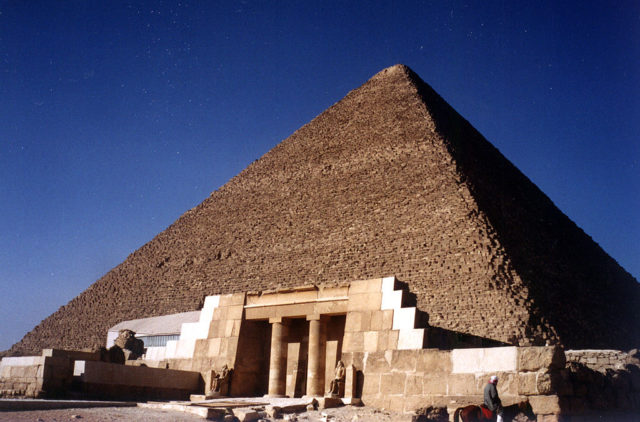 Have you ever asked yourself why we call them ‘the seven wonders of the world’?  Well, it is simply because we just can’t explain them.

One of them is the pyramid of Cheops which is still a mystery after thousands of years. 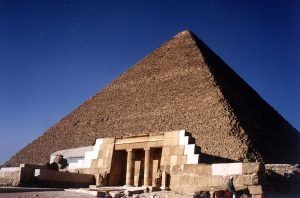 So, today I will talk to you about Ancient Egypt and time travel. Do you think there is any connection?

Even though we have a very advanced technology, and thousands of years of knowledge we still cannot understand how the pyramids were built and of course by whom?

What do you think was the reason for these monuments being built?

It was about 2600BC when this unique construction was made, as a tomb for the Pharaoh Khufu.

It is said that hundreds and thousands of slaves worked on its construction for more than twenty years. But how could such a perfect structure be achieved just with some copper and brass tools?

It is more than that

Do you all know where the Cheops pyramid is? Looking at its location on the map of the earth, it is exactly at the geographical centre of the land surface of the Earth.

How did this happen? Is it a coincidence?

Ok. Now let’s talk about the construction of this huge monument.

It uses about two and a half million blocks of stone each one weighing at least, two tons, some of them up to even 50 tons.

Just think that all these massive blocks were moved somehow, cut and fixed to one to the other so tight that nothing can pass through them.

The height of the pyramid is over 400 feet. So could this all be done by slaves? No matter how much time they worked for, do you think it is possible?

Each one of the 4 sides of the base of the pyramid is over 750 feet in length, so this really is a massive construction.

How can you explain the fact that the four sides of the pyramid are orientated exactly to the cardinal points (North, south, and east, west)?

I can’t give an answer to all these questions, but what I can understand is that the Egyptians might have had an advanced knowledge of mathematics and earth measurements.

The pyramid had been built with such perfection that we can’t explain it. Even to this day in our times, we haven’t seen something like this.

Looking at the location of all the pyramids, they form a belt around the world, the one which connects the Bermuda triangle. This zone is named ’the zone of silence’ by the Mexicans. 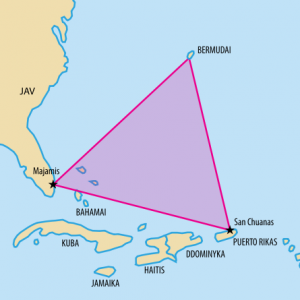 In this particular zone, radio and any electronic equipment do not work and many weird things have happened. Planes disappear, meteors are attracted to it and of course, there are many other happenings.

Scientists claim that the pyramids were built over 4600 years ago, but we also know that copper and bronze were used but not iron.

How were these huge stones cut and shaped with this accuracy? Even by today’s standards, it would remain a challenge.

Under the pyramids, large tunnels have been found hundreds of meters deep and drilled with 90-degree perfect angles. How could this be done only with the use of hand tools?

There is a field of science (Tectono Magnetism) which studies the changes of the earth’s tectonic plates. It is said that the Earth is held together inside by triangular pyramid-shaped energy. The strange thing is that the pyramids are located on a belt exactly at the point where this energy has contact with the Earth.

On this enormous magnetic field maybe we can find the explanation for the strange things that happen in the Bermuda triangle, as this is also situated on this belt.

It is supposed that there was a functional purpose for the location of the pyramids in these positions.

Looking at these points, do you think the pyramids were designed to be used only as a grave? They were more like a cone-shaped energy, a tube, connected with the gravity.

In his book’ Physics of the Impossible’ Michio Kaku, claims that a civilization who could control gravity could easily control this energy and travel in space to interstellar distances and even travel through time.

So, as we can see, our civilization is way behind in technology and science, so the pyramids could be gateways for travel in space and time.

Astronomy, its connection with the pyramids

Why does astronomy play an important role in the construction of the pyramids? 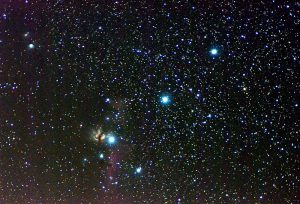 The pyramid of Cheops has four kinds of columns all aimed towards the sky.

Robert Bauval in his book ‘The Orion Mystery’ claims that there is a connection between the pyramids and the three stars that form Orion’s belt.

There must be an explanation for all this and it is not impossible for this ancient (yet so advanced) civilization to have had the knowledge of time and outer space travel.

Who is Scarlet Moffatt? She is 26 years old former Google boxer and while she was talking to “Ι ‘m A Celebrity” she admits that she believes that pyramids were built not by aliens but from people from the future. Her theory was that we need a speed faster than the speed of light in order to travel in the past. So how are the pyramids connected with this? The tip of the Cheops Pyramid is at the same latitude as the speed of light so the future humans went back in time to built this ‘time machine’. The speed of light is 299,792,458 metres per second  and the cooordinates of the pyramid is 29.9792458°N,  Is this just a coincidence? as we know the speed of the light is the most probable way of  time travel so maybe the creators of the Pyramids came from the future and built this monuments as time machines or just to give us clues? maybe the creators were humans from a far future or maybe a very developed alien civilization. Who can answer to these questiions?

We know that the creators of all those reat construction were seen as gods and as a devine power. Ok i am not going on the road of the religion talking but for sure was a major power.

Just think about the 3000 old hieroglyphs found in Gyza Pyramid , showin high tech technology as an helicopter, a modern space craft,a tank, among the snakes , insects and other symbold. You just can assumer that the ancient egyptian have seen those modern machines or at least pictures of them What do you think?

What are your thoughts?

I have read so many things about this world wonder and it’s mystery’s and more and more I am convinced that yes, they could travel in time.

They had much more advanced knowledge and technology than what we think. More and more archaeological proves and urban legends show that time travel was mastered from those civilisations, ancient but more advanced than we thought.

What do you think?

Are all these details about the construction of these monuments only coincidence? Do you think there is much more to it? Take a look at this video before you answer!

Thanks once again for reading and I would really like to know your opinion. Of course, for more question, you can contact me and any comments are welcome 🙂