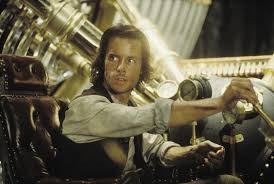 On this post, I would like to talk to you about the H G Wells time machine film and other all-time classic time travel movies. Have you seen this one?

Where, when, and who?

The Time Machine is a film inspired by the H G Wells novel first published in 1895. One of the greatest adventure, fiction and romance movies – The Time Machine was released on the 17th August 1960 in the USA and was directed by George Pal.

The movie was filmed in Culver City in California and the budget was estimated at $750,000 dollars. 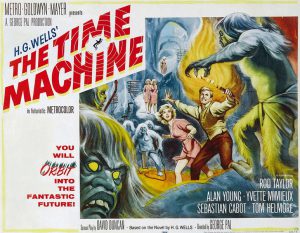 Rod Taylor played the role of Dr. George Wells and carried a great performance. Alan Young played the character and loyal friend David Filby and Yvette Mimieux was cast as Weena, the beautiful love attraction for George set in the future.

This film was, and still is one the most touching time travel movies. Written by David Duncan and HG Wells, it was a wonderful success.Young and old to romantics and scientists, everybody could and can still find a small piece of themselves in this story.

The Time Machine movie was adapted to the modern days in 2002. Starring Guy Pearce as Dr. Alexander  Hartdegen, with a few changes of course. The action takes place in New York and not in London and also a few new things added to the original story line. Alan Young plays also a came role in the new adaption of the film. it is an amazing story that stand the challenge of time. The new version was a real success and  the new generation could enjoy it 😉 Not that you don’t enjoy a 60’s classical but in this way you cover all preferences:)

This is a beautiful story which awakes a lot of feelings if you watch it. The action takes place in a house in the old Victorian England.

On a cold winters day, four friends are invited for dinner by George, a young intelligent inventor. He is not there when his friends arrive and they start dinner without him. Mrs. Watchett, the housekeeper asks them to proceed with their meal as agreed previously with George should he not be there on time.

Tired, wounded and dirty, George appears and tells them what has happened since the New Years Eve night, one week ago when the met the last time

One week previous he showed them a small machine which could travel in time and went on to mention the concept of time and described the fourth dimension. He actually carries out an experiment on a small model before their eyes and the vehicle disappears but they still don’t believe him.

When all of them leave, Filby his best friend advises him to destroy the machine and to let it go. They are supposed to see each other again in a week’s time at George’s house for dinner.

George decides to use the machine and travels into the future. His first stop is in September 1917 where he meets his best friend’s son James Filby. He finds out that his friend Filby has died in the war. The United Kingdom is at war with Germany for 3 years already at this point in George’s journey.

George is very touched learning that Davis Filby believed in him after all and had asked to not sell the inventor ‘s house (now old and sealed off) because he will come back one day. He was really a good friend.

A nuclear explosion has destroyed everything and a volcano has erupted. Saving himself in the last second the young inventor starts the machine forward again but is covered by lava which cools down and traps him inside.  George travels into the very distant future encased in rock as the years pass by.

The time machine stops on October 802 701, where he discovers a strange civilization formed only of young people – The Eloi. George is surprised when a girl is drowning and nobody tries to save her. This civilization does not show any feelings and they continue to dance and play while the girl struggles for survival in the river. George finally takes it upon himself to save the girl.

George goes on to find information about the Eloi but without any success. All the books are so old that everything turns to dust when touched. The people in this civilization do not have any interests or knowledge – they are like small children.

‘Actually, in the original novel of H.G Wells, the civilizations are in fact all small children’.

Angry, George decides to go back to his own time as he is hurt by the idea that hundreds of years of work and knowledge became dust. He returns to the location where the time machine stands but it is not there. Somebody dragged it into a sphinx building behind doors and he is unable to gain access.

Weena – the young woman who George saved from drowning had followed him and tells him to hide because the night was approaching along with the Morlocks. When a hideous creature tries to take Weena, George scares it with fire and he discovers later that this creature is a Morlock.

The night passes without any more incidents.

The next day Weena shows George the talking rings which describe the human evolution over the past centuries. He learns of a long nuclear war and about how the population has been divided between Elois and Morlocks.

Later, a siren begins to wail and Weena and her people walk like hypnotized towards the sphinx building, going inside one by one until the siren stops. Then the doors close and Weena is trapped inside.

George wants to save her and the others and he discovers that the Morlocks are cannibals and the Elois just their food; they are raised only to be a source of food for the Morlocks.

Finally, George gains entry to the caves and with the help of the Elois he destroys the Morlocks with fire. The entire area where the Morlocks lived is destroyed.

After this adventure, George is just in time for dinner with his friends on the 5th January 1900 and tells them of his time travel adventure. Of course, they don’t believe him and his good friend Filby tells him again to destroy the machine.

After everybody leaves George uses his machine again and disappears into the future.

Filby and Mrs. Watchett noticed that the young inventor took with him three books and the viewer is left to think which books could be missing.

Did he take certain books to help the civilization in the future? 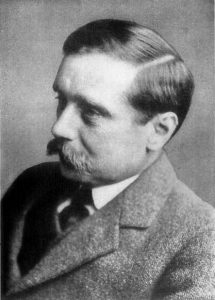 The Time Machine was first released on DVD in 2000.

The H.G. Wells story was an inspiration for this very successful movie, rewarded with the Oscar prize in 1961 for best effects, special effects and was nominated for the Hugo Award for best dramatic presentation in the same year.

It was such a successful film that the director George Pal decides to make a sequel but unfortunately, he died before this became reality.

I wonder what he had in mind!

I am sure not everybody notices few details, I would not call them mistakes anyway…Are part of the film so, I will just say ..the funny part. For example, when George was traveling and he stops his time machine in 1966, we can see Filby’s Department Store and in its front window is a display showing ” The latest tubeless TV “. This TV Looks a lot like new modern flat panel televisions or computer monitors. How this?

If we take a closer look at the time machine, on the plaque on the control panel reads ” Manufactured By H. George Wells “, the writer’s name.

During the air rice scene, we can see a little girl crossing the street, when everybody is rushing to the shelter, and she stops to pick up something that she dropped. Again, if you look carefully you can see is a small woody woodpecker toy.

The remake of the film, in 2002, was directed by Simon Wells, H.G Wells great-grandson.H.G.Wells was the first to use the name “time machine”, and since then any vehicle which travels in time is called like this.

After Wells witnesses how the atomic bomb developed, how it can destroy the humanity, he wanted on his own epitaph should read “God damn you all, I told you so ” 🙂

When President Roosevelt read “The Time Machine” he was impressed by the class distinction and invited Wells in the Rose Garden to discuss the situation with him.

I hope you enjoyed this post for The Time Machine and of course, I will be covering a lot more films in the future but if you have any questions or there is something you would like to add just leave me a comment below.