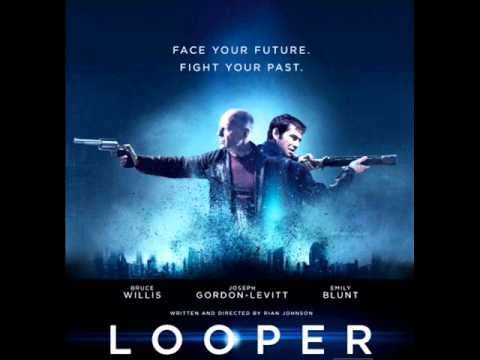 Hello and welcome once again to my site. I am happy to be here again and wanted to give you my opinions on The Looper Film starring Bruce Willis 🙂 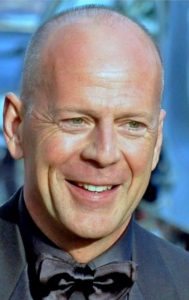 The movie follows a time travel story from 2074 where criminals send back their victims in the past and have them killed by loopers assassins.

Joe, a lead character in the movie encountered himself by himself when his older self is sent back in the past to be killed.

25-year-old Joe works in a crime syndicate for Kansas City in the year 2044. During this time, the use of technology to dispose the murdered bodies isn’t in place yet; the syndicate uses time travel approach which got invented in the year 2074.

Loopers kill and get rid of victims led by a man named Abe who was sent from the future. They are paid with bars of silver strapped to the target. When a looper retires, his future self will be sent back to 2044 to target his younger self but this time, with gold bars as payment.

During the era of 2044, these killers also known as the loopers live a very luxurious life until they are tricked into “closing their loop” which means unknowingly killing their old selves and paying a stick price of 30 years of retirement. This will continue until that moment when he is brought back in time to face execution by his own younger one.

Joe had a wrinkle of time when he failed to recognise his condemned older self which unfortunately slipped a chance for old Joe to make a flawless escape. With his ‘loop’ left unclosed and his employers now after him, young Joe tries to stay ahead of the pack long enough to eliminate older Joe – whose presence in the past is no coincidence, but rather the beginning of a much larger (and soul-crushing) mission to alter the future.

To be honest, Looper is not quite exactly what the trailers and advertisements have made it out to be.Yes,

Yes, the meat of the story is the ‘young Joe vs. old Joe’ confrontation – but Johnson actually makes it more interesting, expanding the film into a tale that uses sci-fi and time travel, predetermination, and even telekinesis.

See also  Back to the Future 2 Film - My Review

As such, those hoping for Looper to be a nonstop run-n-gun action film are going to be disappointed with the high-style and slow-pace of Johnson’s film – while those who like their sci-fi deep and thought-provoking may be pleasantly surprised by how much substance this film actually has. 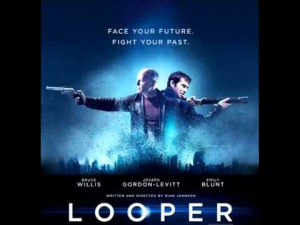 Memories of both timelines seem to coexist in Old Joe’s mind, becoming either clear or dim as their probabilities change. Old Joe meets with Young Joe at a diner (where the latter has typically frequented) and explains that he is going to kill the Rainmaker as a child to change the future and save his wife.

Kid Blue and several other Gat Men arrive at the diner, and a gunfight ensues. Young Joe ends up with a corner of Old Joe’s map containing one of three locations circled on the map and a number. Old Joe escapes, and Young Joe runs off into the fields to escape would-be punishment from the Gat Men.

As with all time-travel movies, there is an awkward moment when one character asks plaintively about the logical impossibilities inherent in what’s happening and another character tells him to just shut up and forget about it.

Of course, there is no sense in the time travel in Looper, but no less sense than in any other film in this genre. Johnson makes up for it with narrative force and a sense of a profound taboo being broken.

Gordon-Levitt is made up oddly – to look like Willis’s younger self, of course, but this has an uncanny effect, adding to the mutant strangeness that pervades the movie. 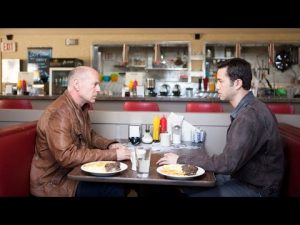 It’s different from the comedy in Robert Zemeckis’s Back to the Future (1985) and the deadpan science in Shane Carruth’s cult indie Primer (2004).

There is violence and fear: criminals have corrupted the very space and time. Jeff Daniels has a funny cameo as Abe, the gang boss who has to make excursions back in time to check this side of the operation is running smoothly. He is contemptuous of Joe taking French lessons and tells him to learn Mandarin because China is going to be all-important.

The story gains depth with the introduction of romance. In most thrillers, female characters tend toward eye candy and are extra to the plot.

Not here. Young Joe meets Sara, a fiercely independent woman who lives on a Kansas farm with her son, Cid (Pierce Gagnon). Although Young Joe has literally come from nowhere, they slowly grow close. In the future, we learn, Old Joe was married, and his wife (Summer Qing) was murdered by a figure known as The Rainmaker.

It’s not revealing too much to tell that Old Joe has reason to believe that young Cid may grow up to become The Rainmaker, and so Old and Young Joe are trapped in a situation with no pleasant prospects. The film is further enriched by the performances of Jeff Daniels as Abe, the future boss of the crime syndicate, and by Paul Dano as Seth, a friend of Old Joe who fears the loop is about to be closed on him.

Think this through. If the loop is closed on you, did you never exist? Or did you live your younger life up until the point you kill your older self?

“Looper,” to its credit, doesn’t avoid this question. It’s up to you to decide if it answers it. Time travel may be logically impossible, but once we allow a film to use it, we have to be grateful if it makes sense according to its own rules.

It isn’t a happy meeting, but the writer and director Rian Johnson makes it a largely diverting one, filled with wit, smashing edits and at times distracting illusions that reflect his cleverness like little mirrors.

Have you seen this movie? If so what did you think of it?

I would love to hear your thoughts, so leave me a comment below 🙂