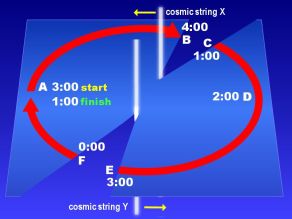 Is this another way of time travel? It is nice to have you again here:). Today, we will discover together how cosmic strings and time travel are related. Oh… of course, first we have to see what are those cosmic strings 🙂

What are the cosmic strings? 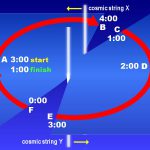 One theory says that they could be large strings left in the cosmos after the Big Bang or the result of branes colliding.

The idea of cosmic strings was introduced in 1991 by the physicist J. Richard Gott. These strings are maybe lined,on the entire Universe, thinner than an atom. They generate a huge gravitation and they can pull anything comes close tot hem. Also, they are under a lot of pressure, like many millions of tons:)

Because they have a strong gravitational force that distorts space-time they can be used for journeys back and forward in time. They can make time travel possible. Any object attached to the strings will travel with a speed that will make this happen.

Cosmic strings are one dimensional. They only have length, like many light years long. These strings are stretching around the Universe, they are millions of times thinner that an atom and a density of million billion tons per cm. It is possible they carry a very strong electrical current.

Cosmic strings can be also described as wrinkles in the Universe.

How does this work?

When two cosmic strings are pulled closed together they may warp the time- space and create a closed timelike curve. Because the cosmic strings have a huge gravity a spaceship attached to them can travel to the past. This is proved only theoretical. How will do this the ship? It will loop around the cosmic string.

So when two cosmic strings moving very fast meet each other they can cause a frame dragging because of the amount of gravitational power. The space ship traveling on the cosmic string always will arrive at the point it started.

Gott was supporting his theory but he said that to be able for a space ship to turn into a time machine and to go back in time, for one year journey the energy needed would be half of the mass-energy of entire Galaxy. So…this a reason why this is still just a theory of the time travel possibility with the help of cosmic strings?

The American Astrophysicist described in his book a time machine using the cosmic strings but as long as no cosmic string had been yet detected….we don’t know how would really work:-) 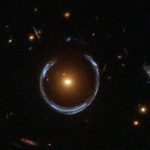 And we also have another inconvenience; we can’t travel in the past further than the moment when the time machine was created.

Cosmic strings are believed to exist but we don’t have any proof. They are just theories. They actually are defects in the fabric of the Universe. They were formed after the Big Bang when the universe cooled.

We have never seen directly these strings but scientists at the University of Buffalo claim that they have found indirect proofs.

Einstein’s general theory is actually the base of all those theories, According to Einstein, pure energy has a gravitational field.

What would be the result of time travel with the help of cosmic string?

What would be the characteristics of the application of cosmic strings for time control? The scientists from Anderson Institute reached the conclusion below:

Time travel to the past possible: YES

So…this would be the results.

I personally think that theoretically, we mastered time travel but if it is practiced… I still can’t be sure. Researches regarding Gott time machine are still done but for now, cosmic strings are just in theory even if this is one of the few ways of time travel possible according to DR. Anderson.

Thanks for reading  my post and if you have anything to add or to ask, your comments are welcomed:)

I hope you enjoyed the video 🙂